Firts of all we must say the Basque Country is a nation with a strong personality. Basque culture is present in many aspects:

– In the language, one of the oldest languages in Europe, rich in peculiar sonorities

– In the architecture, with timbered picturesque houses

– In the basque traditional sports, inspired on old rural customs

– In the Basque pelota. The most known variation of this sport is the Jai-Alai

– In gastronomy, which enjoys a reputation for being one of the best cuisines in the world.

– In traditional basque songs, which have lead to the international recognition of basque choral groups

– And last but not least, in the Basque dance, essential aspect and ancestral tradition of Basque people.

MAP and LOCATION OF THE BASQUE COUNTRY 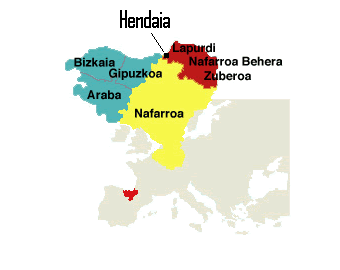